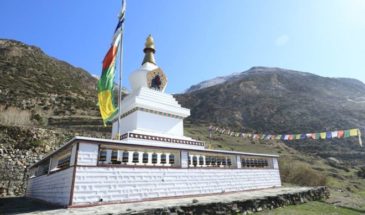 As of those old days till in Annapurna area a trip of around 3 weeks can be organized in two ways. This is for making the

trip much enjoyable and adding the classical taste of the those days in the Himalayas. So, here with have combined the Nar – Phu route as Annapurna Circuit alone may be not that adventurous since some part of it has been linked with an under-construction road now.

Nar-Phu area is opened recently as substitute trekking route which has been trekked by just a small number of trekkers. So, this part is still unspoiled, less crowded and purely traditional. The area is lived by Gurung people same as Manang valley but much traditional in day to day life and have followed the Tibetan Buddhism just like in Tibet. There are so many ancient monasteries, Stupas, mani walls as well as the ages old Buddhism idols, paintings, scrolls etc. can be seen in these monasteries.

The everyday views are just exceptional with great offer of adventure, nature and cultural experiences. The whole would exactly not be possible from the Annapurna Circuit alone.

Most of the overnight spending places are finely established lodges, but not that good in Nar – Phu part. In order to make this part also a unique and more exotic you may order us for the camping arrangement.

We bring every comfort, luxury and the taste of those old camping days here in the Himalayas!

The presented itinerary is for the Annaourna Round or circuit including of Ghorepani – Poon Hill trek. You may have more than one optional trek as per the available the holiday period.

Arrival in the Kathmandu

Arrival in the Kathmandu/Hotel in Thamel. International airport. Reception and transfer to Hotel. Your Hotel will be located in the centre of Thamel at peaceful location. Upon arrival at Hotel, room check- in is done with welcome drinks. Then a short trip briefing is followed by signing on the trek permit application forms, acknowledge all the driving and other tickets/vouchers – most of which handled by guide, so it is not a big deal but good to note down the time table etc. Also please pass us your travel insurance information incse of emergency for the back support. Then there will be a free time for rest or visit around on your own.

Morning breakfast around 7am at the Hotel, then board on the privately reserved Toyota jeep to drive to Ngadi (930m). Ngadi is a small town located on the bank of Marshyangdi River (about 220km). The road upto Besisahar is finely built all season road; after Besishar it’s a seasonal road. During the rainy season, the drive only upto Ngadi will be possible without too much dirt and muddy crossing. This is under-construction site. Overnight at the lodges – to which we have termed as the “Mountain Lodge”. All your accommodations during trek will be on the similar ones. The comfort and facilities may be vary from lodge to lodge but every lodge will have one restaurant for the in-house guests, therefore each one is more than sufficiently able to provide good meals, offer good accommodations and friendly environment with cleanliness. During your journey, your breakfast is provided everyday in the same lodge where the night is spent (time around 7 to 8). Lunch around in 11 to 12 almost everyday and dinner in the same lodge where the night is spent. This will be continued on the days to come while you will be in the mountain.

There is a road connection between Ngadi to Jagat – but as said above it is only the seasonal road. So the drive may be not possible. We believe that the trek should be more than pleasant! So no use in case any jeep available to drive to. The jeep available here are public jeeps used for the local passengers. As long as the road condition is OK such jeeps are available. So you may choice whether take the jeep or do trek. If taken jeep, trek will be quicker. You may decide stay at Jagat or go further is totally no problem; just talk with your guide and let you decision know to the porters.

Manang rest day. O/N & meals similar. This is majorly for the acclimatization. But at the same time you may be able to explore some of the best sites of your entire trip such as the interesting monastery (the cave monastery), the glacier lake of Gangapurna etc. If you would like to take a little longer hike, also available.

Ghorepani to Poon Hill (3210m) in the morning and during day trek to Birethanti (1050m/6hrs). O/N similar. This is the last night of this trek, time coming to say good bye to the porters. Guide may be with you until you are in Pokhara. The porters will be happy to sing Resham firiri songs and present the folk dances. You may take part if you would like. You may also sample some locally/home brewed rice wine. For most of the porters this is a lovely drink!

A Short trek to Nayapool

A short trek to Nayapool and drive to Pokhara/good bye to the porters. Your may be transferred to the Hotel; take room and enjoy the city life again. Hot shower, shaving rest etc! Find your best meal which you would be looking forward from quite a sometime ago. Enjoy the leisurely again! Guide may say good bye here!

Full day in Pokhara. Visit some of the incredible places such as Davis Fall, Gupteshwor cave in quite convenient distance from the big city.

Drive to Kathmandu on the car. Services over. Good bye to the guide.

Transfer to airport and Happy See Off!