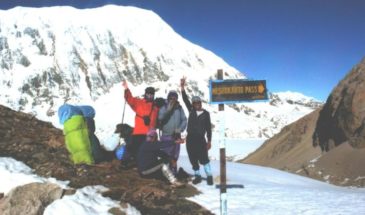 This is a classic and one of the most rewarding treks in Nepal.

Trip Enquiry
Trip code WT-CODE 619
Country: Nepal Altitude: 5400m|17714ft Difficulty Level: Medium,Difficult Season: Early Autumn, late Spring-the best
This is a classic and one of the most rewarding treks in Nepal. The southern slopes of Annapurna range is heavily settled and farmed, except the higher regions which abode the thick forests of Rhododendron, pine, fir, juniper etc. and most of the tribes inhabiting here are the Gurungs, Thakalies, Magars and Brahmins and Chhetris in the lower areas. As on turn westwards into the Manang Valley which is also the rain-shadow of the Annapurna massif, dramatic changes occur. Though, there are small fields supporting some crops of millet and wheat and small flocks of sheep and goats, the Manang tribes are traditionally a trading race, they are also Tibetan by origin and Buddhist by religion, and their architecture and life-styles is quite different to these tribes on the southern slopes. Thakalis and Mustangees tribes control the busy trading and pilgrimage trail along the Kali Gandaki, until move through the gap between Dhaulagiri and Annapurna into the wetter zones, where can meet Gurungs and Magars. On the whole trek there is not one day during which one does not have magnificent views of Snow Mountain. The journey will come to end at Jomsom and then fly or drive back to Pokhara, before arriving to Kathmandu.

Arrival in Kathmandu International Airport. Reception and transfer to Hotel.

Morning drive to Besishar and further to Bhulbhule or Ngadi on the same day. Upto Besishar there is a finely built (black topped) road and further to Bhulbhule its pretty much nice and all seasonal road, though without black topped. The jeep or bus (according to the group size) that privately reserved from Kathmandu will transport you upto here. An uncompleted road exists upto Syange now and the planning is finally to bring upto Chame and Manang valley. The work is being progressively done and chances to find the road has arrived further to Tal or even above when you are here. BUT the condition of this road is not comfortable and there is no reliability of finding the vehicles unless reserved privately. So the trekking parties are suggested to trek and drive as following for not missing the most beautiful sections.

Trek to Upper Pisang (3000m) – follow the Marshyangdi River all day, passing through the narrow and steep sided gorge. Nearing the village of Passing top a ride to get first views of the Manang valley, a wide U – shaped valley hanging between two lines of snow peaks. It takes 6hrs approx.

Upper Pisang – Manang Village (3440m). (via Ghyaru – 3700m and Ngawal – 4500m): starting from the lodge we ascend to the broad forested valley floor, follows the trail through the Gyaru village to Ngawal. During the whole trek you could see Annapurna range including other major peaks and you may visit Ngawal monastery and Braga village. Walking distance about 6hrs. Between Ghyaru – Ngawal, you will enjoy with Annapurna North range and some others Mountains (Pisang Peak–6081m, Lamjung Himal–6932m and Annapurna II–7937m on the east, Annapurna IV –7525m, Annapurna III–7555m, Gngapurna Himal–7454m on the south, Tilicho Peak–7135m and the view of Grand Barrier on the west, Chulu East–6300m and Chulu Far East- 6059m to the north side. And in day 08 – is mainly to explore around of Manag and around of it. The village has about 500flat roofed houses, is picturesquely set amounts spectacular scenery. A visit to the Milarepa’s Cave (4500m) within an hour and half enjoying the great views of the Himalayan peaks in all four directions! Little trek about 2 hours to Khangsar (3734m).

Khangsar – Tilicho base camp ( 4500m): The trail follows up on the Khangsar Khola and dry muddy trail to Tilicho B.C. There are two trails, one is normal but longer and another is harder but is short. There is only one simple lodge is the only place to stay if you are based on Lodge Trek at the bottom of Lake. Walking distance approximately 5 hrs.

Tilicho B.C. – Mesokanto B.C.(4900m): Starting up the right in front of the rest house the trail reaches to Tilicho Lake and taking the right hand site bank of it, we trek to Tilihco Khola camp and halt journey for lunch. After we trek farther proceeding higher to climb the Eastern Pass ( and reach on top of Tilicho lake which is the Mesokanto B.C. It takes about 6/7 hrs to reach to the destination, it is best to start earlier. The tremendous views ofTilochoLake as well mountain range.

Mesokanto B.C. – Mesokanto Pass (5099m) – Kharka (4500m): Though the crossing of the pass is technically difficult and possible snow and ice during the cross After about 3 hours reach the top and enjoy some absolutely stunning high Himalayan scenery. The entire Annapurna rages in the south; the Mukut and Mustang Himal to the west, Dhaulagiri, Nilgiri,TilicoPeak and excellent views of Damodar Himal to the north. Walking distance approximately 6 hrs (There is another easy pass which is non challengeable both trekkers and Nepalese staffs and the view would be the same.)

Kharka – Jomsom (2750m) Rest: Today walk for at least 3 hrs down hill to reach Jomsom. Through the trek one can seenDhaulagiri, Nilgiri, Thapa peak Tukche and other snow caped beautiful mountains.

Flight or drive to Pokhara. Hotel in Pokhara.

Drive or fly to Kathamndu. Hotel.