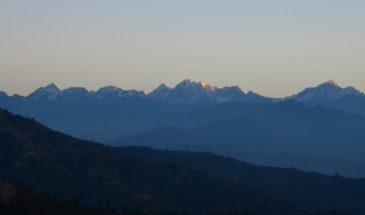 At the eastern rim of Kathmandu Valley – the ancient Newari Town of ‘Dhulikhel’ has situated at 1550m above sea level and some 32km east of Kathmandu and 74km south west of Kodari can be reached by two major highways.

At the eastern rim of Kathmandu Valley – the ancient Newari Town of ‘Dhulikhel’ has situated at 1550m above sea level and some 32km east of Kathmandu and 74km south west of Kodari can be reached by two major highways. The recently completed ‘B.P. Highway’ links Dhulikhel to Terai and the ‘Arniko Highway’ connects to Tibetan border town of Kodari.

The snow-fed mountains seen from Dhuklikhel are some of the best panoramas one can imagine. When a blue haze covers the lower portion of the mountains, they seem to be floating in the air. Green inviting hills of which still virgin and some turned into beautifully carved agricultural terraces cater to the beholders’ pleasure.

The oldest area of the town, the southern end, is an assembly of old Newari houses, often occupied by 20 or more members of the local extended families. Their most valuable assets are the beautifully carved windows and doors, fine examples of traditional Newari craftsmanship.

There are numerous temples in the town depicting traditional and old Newari craftsmanship. These are places of worship for local people. The core area of Dhulikhel has interesting narrow cobbled streets and lanes embedded with number of Hindu Shrines and a few Buddhist Stupas.

We drive you to Dhulikhel on privately reserved car or van as per the group size. Check in Hotel upon arriving here and lunch. Later we take to the old Newari town to visit. It’s an interesting visit to the old temples, squares, streets etc. Return your hotel and rest. We gather again for ‘Sun-Setting’ view; later is dinner and good night! Next day morning, depending on season to season, we gather again at the viewing point for Sun Rising scenery. A clear morning really makes an impressive panoramic view of the Himalayan peaks and the rising sun’s rays hitting to the line of Himalayas. It’s truly dramatic and hard to explain in words! Later breakfast and get ready for the Hike! This pleasant 2 hrs stroll starts off south from Dhulikhel then truns west, crosses paddy fields and runs alongt he course of a small stream. It eventually meets the Banepa to Panauti road a little north of the town. Panauti is a beautiful little town with numerous temples and magnificent woodcarvings. You will be picked up at Panauti and drive to Kathmandu/your hotel.