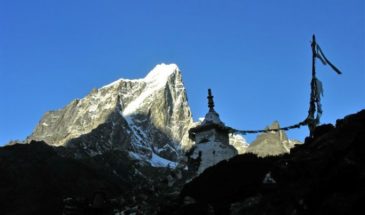 This program is for the adventure lovers! It includes three high passes of Everest region that joins three main valleys of Khumbu and traverses three … Read more

The trek begins after landing at Lukla’s Tenzing-Hillary airport (2840 meters) describe by many as one of the most notorious airstrip in the world. The walk progresses through the Dudh Koshi (River), rotating Mani wheels, crossing suspension bridges and chatting with fellow trekkers and porters. Namche Bazzar a popular stopover on the Everest Base Camp trial is a boomed town comparing to the villages passed  through other small, beautiful villages like Choplung, Phakding, Monjo, Jorsalle etc. In Namche there are appealing coffee shops, bakery outlets, restaurants and even a disco clubs and pool houses, among others.

The second day here begins by walking after having breakfast at the lodge. Trekkers have a choice here. Some select the vintage route to the base camp via Tengboche; others prefer the trial via Gokyo Lake while the daredevils select the Three Passes Route! We will catch the trial up to Thame as we are venturing the Three Passes.

Thame village, situated at 3810m, west-north of Namche of well-renowned mountaineering legends like Tenzing Norgay Sherpa, Apa Sherpa, and Ang Rita Sherpa were born. On the left-hand side of the trail just about entering the lower Thame village we see the in-take reservoir of the KBC (Khumbu Bijuli – electricity Corporation). Next settlements before the Renjo Pass are Marlung (4210m) and Lungden (4500m).

We arrange to begin a little earlier from Lungden for the Renjo La with pack breakfast. The walk is pretty steeper and eventually makes climbing on a long slab of rocks. The view from the top earned after the hard toll makes you completely forget tiredness. The super panoramic view includes Mt. Everest, Lhotse, Makalu, Cho Oyu – all 8thousanders and many other world famous, beautiful Himalayan peaks as well as the sweeping view of Ngojumpa glacier, the Gokyo village, the lakes etc. Next stopover is about 1100m descend to Gokyo village, situated on the bank of Gokyo Lake or the Third Lake – turquoise green water, glittering snowcapped mountains, out of the series of Five Lakes.

Gokyo Ri (5357 meters) is one of the popular view points in the Gokyo Valley. It offers magnificent view as Renjola does.

Next is the Chola Pass of 5420m, another adventure to challenge! It gives super satisfaction of doing it and certainly the pass brings another window to explore of the other side, but is less scenic. Descending Dzongla we enter into the EBC valley!

Next day, we climb Kalapatthar to enjoy sunrise. From there one can catch the magnificent views of Everest, Nuptse, Pumori, Amadablam, Mehra Peak (5820m) and Thamserku among other mountains. Kalapatthar (5623 meters) is the highest to watch the summit of Mt. Everest without technical climbing.

Next challenge is to cross the Khogma Pass ( 5535m) from Lobuche and descend to Chhukung or Bibre, near Dingboche. The day is the toughest of all in the entire journey. You will be climbing 630m and descending 1200m in this elevation, in this kind of trail! Your adrenaline is wonderfully great!

Resuming trek down to Lukla along the trail of Everest Base Camp passing small but beautiful settlements like Orsho, Shomare, Pyangboche Deeboche, Tengboche and to Namche then to Lukla. A detailed itinerary is found herewith.

Rest day and explore around. Overnight at lodge/guest house.

Morning Kalapatthar (5623m.) and then trek return to Lobuche. Overnight at similar lodge as going above

Gokyo – Gokyo Ri (5483m.) in the morning and at day may explore the part of 4th Lake. Overnight at lodges.

Thame to Namche 3440m. Overnight at the same lodge as before.

Lukla to Kathmandu. Overnight at Hotel in KTM as before. Day at free.

Transfer to airport and fly home!